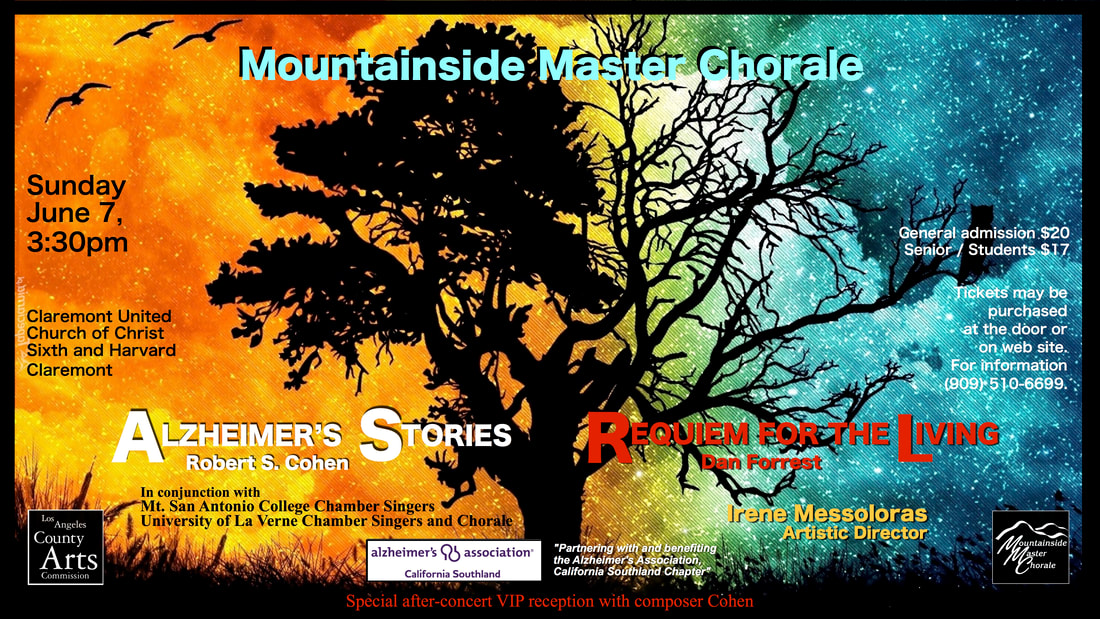 PLEASE NOTE: June concert is dependent on recommendations from L.A. Public Health Department and official notice from the governor of California.

Alzheimer’s Disease has touched the lives of so many people. As we watch our loved ones struggle, we feel their pain and sadness. Join us for a pre-concert presentation at 2:30 PM in the CUCC sanctuary with Robert Cohen and Irene Messoloras. Hear how this incredible work was created and how it has touched the lives of audiences and musicians around the world.

There will be a special post-concert VIP reception with composer Robert S. Cohen.
​Hosted by Alzheimer's Association

Alzheimer's Stories
​
In 2008, a member of the Susquehanna Valley Chorale who asked to remain anonymous made a donation to the chorale to help fund the commissioning of a musical work on the subject of Alzheimer’s disease to honor his parents, who had both died of it. In collaboration with 2012 Grammy Award winning opera librettist Herschel Garfein (Elmer Gantry), a blog was set up on the choir’s website www.svcmusic.org to record stories by chorus members and the local community describing experiences with relatives and friends who had Alzheimer’s disease with a selected group of those stories becoming the basis for the work: Alzheimer’s Stories for soloists, chorus and large ensemble.

The work is in three movements the arc of which loosely mimics the progression of the disease:

The Numbers – an objective description of the discovery of the disease by Dr. Alois Alzheimer in 1901 including the number of individuals currently afflicted, future projections and dramatized conversations between Dr. Alzheimer and his first patient, Auguste Dieter. The movement ends with an extended setting of a quote from his patient Ich hab mich verloren, “I have lost myself.”

The Stories – a pastiche of a number of selected stories taken from the choir’s blog. With a mixture of pathos, poignancy and humor, we meet a number of individuals afflicted with the disease, portrayed by the two soloists, as well as the recollections of family members. Two notables: a woman who still thinks she’s on a boat to Panama with her father; and a WWII Navy veteran who repeats the same bawdy story of the war so many times that the chorus can recite it by heart.

For the Caregivers – The most difficult part of writing a work about such a terrible and ultimately hopeless disease was how to end the work with some semblance of hope. The clue came in a recollection by one of the chorus members about a visit to a nursing home where a patient asked them to sing. When asked what, the patient replied: “Sing anything.” First referenced in the second movement, this idea became the centerpiece and focus of the last movement. The core of the brilliantly realized libretto is as follows:

Find those you love in the dark and light. Help them through the days and nights.

Keep faith. They sense what they cannot show. Love and music are the last things to go. Sing anything.

Alzheimer’s Stories received its world premiere on October 9, 2009 performed by the Susquehanna Valley Chorale at the Weis Center for the performing arts in Lewisburg PA in a program entitled “Monument to Memory.” It was recorded for radio and television by the PBS station WVIA and broadcast in November, 2009 and has had subsequent performances throughout the U.S. and in Europe, was recently performed at Carnegie Hall by the San Antonio Mastersingers and is scheduled to be there again in April 2020.

According to recent data provided by the Texas Department of State Health Services, these are the most recent statistics on the disease.
​Alzheimer’s Stories is published by Edition Peters
What critics have to say about Alzheimer’s Stories:
“One of the greatest achievements a work of art can hope to reach is to bring us to our darkest places and show us a light. To illuminate our fears, ease our anxieties, and heal our pain. Whether or not you’ve struggled with this disease personally or as a caregiver, this is what makes Alzheimer’s Stories a truly special experience.”
– Kody Wallace, Choral Journal (Oct. 2018)
“At times somber, jaunty and inspirational, this earnest exploration of a difficult theme, conducted with great insight by Anna Hamre, connected on both a cerebral and emotional level.”
– The Fresno Bee
“Best Arts 2015” (Dec. 26, 2015) “In terms of getting the message out about this debilitating and devastating disease in a heartfelt and meaningful way through music, this reading of Cohen’s innovative work could be deemed a total success.”
– Guytano Parks, Cleveland Classical (Nov. 18, 2012)
Copyright @2021 Mountainside Master Chorale